Alternatively, messages with consumption data can be transmitted to the so-called “collection unit” of the WACO system, which collects data from WM868-SI / SA / SISA and WM868-TI / TE modules in the WACO radio network, converting the collected data into standard M bus protocol messages -BUS and their further transmission in M-BUS format via the physical bus or in the virtual WACO bus.

The module with a transmitting power of 5 mW is powered by an internal battery with a capacity of 1.6 Ah.

The modules are equipped with a “Wake-On-Radio” system, which allows communication to be initiated on demand (outside the set interval). With a special radio message (“WOR-packet”), the modules can be immediately switched to the active state and current information about the water meter status can be requested. This mode can be used to obtain instantaneous temperature and / or humidity information using a walk-through reading method (WALK-BY system), or to perform remote diagnostics and configuration of modules via a radio network. 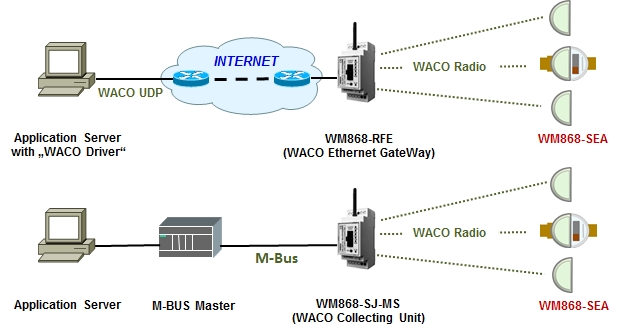 There are no reviews yet.

Be the first to review “Module WM868-SEA” Cancel reply