The Day Degree Method Under Fire

The day degree method is currently under fire by companies, which have for decades been selling heating radiator cost allocators. You ask why? The reason is simple. In 2014, Czech  legislation considered the day degree method as equivalent for heating costs allocation in residential buildings.

The differences between the two methods are quite essential. Each method has certain advantages, but also weaknesses. It should be emphasized that it is possible to convert any vertical heating distribution in a building into the horizontal one and then perform meter reading in each apartment with a calorimeter. Unfortunately, the price of such conversion is quite high, so we have to choose from legislatively and technically available meter reading methods. The costs of both methods are almost identical, but the day degree method technologically implements on-line communication. At the present time, on-line communication can bring apartment users additional benefits that can be of key role for apartment owners in their decision making. They can bring a whole new perspective on the operation of the house as a whole. I do not want to scientifically or technically analyze the advantages and disadvantages of each method here. I would only like to highlight some of the characteristics of the 2 different methods of heating cost allocation, so that landlords could familiarize themselves with what the methods are about.
HCA (Heating Cost Allocators) indicate heat radiated from the radiator during the heating season. The first problem is the location of HCA on the radiator and the balance or imbalance of the heating system. To make sure everything works well and correctly, all thermostatic valves in the building would have to be set in the same position – to allow for equal flow of the radiator heating medium. One can be certain that the valves in each apartment are set differently, so that HCA registered values are measured in different conditions. Due to this fact, the measurement error can be reaching to about 15%. Another problem lies in the fact that radiator surfaces at each apartment have different finishes. This significantly affects the heat transfer between radiators and HCA. There lies another error of around 13%. I am not going to mention other problematic areas, such as for example the radiator location coefficient, which should correspond to the specific room position  within the building, just as many other coefficients, which the distribution company sets according to their own experience. The results are fatal. 15% of apartment owners pay up to 50% of the heating costs for the whole building. Legislation based limits for the distribution of heating costs – formerly ± 40% and currently -20% and + 100% – have been established in order to countermeasure the above-mentioned problems of the HCA method of heating costs allocation.

The Day Degree Method is based upon meter reading of room temperatures in an online mode. From the name of the method it is obvious that it takes into account the heat penetration in-between apartments and rooms. For landlords, such method is clear and easily understandable. Room temperatures are simple data values that are not influenced by any artificial factors. Yes, they can be influenced by open windows, but if you ventilate normally, no impact on the allocation of costs will be made. However, what is really essential is that the temperature measurement error lies in the range of tenths of a degrees, the level of accuracy that is absolutely incomparable with that of HCA. However, it is essentially the overall result that matters. The HCA method has to be corrected by legislation. On the contrary, with the day degree method apartment owners pay only for the warmth in their apartments that is really in there. When you look at room temperatures in a building of 60 apartments, you will find the room temperatures to be ​​ranging from 19 to 25 ° C. This result indicates that heating cost allocation differences will be up to 15% or even less. The conclusion is clear – the degree day method does not need any legislation limits, each owner simply pays for the warmth in the apartment that is really there.  The generally applicable rule says that an increase or decrease in the average temperature of an apartment of about 1 ° C represents 5-7% of heating costs. This fully corresponds with the temperatures in the apartments.

In addition, the EU legislation would actually prefer measuring the heat delivered to a given apartment. As I mentioned at the beginning of this article, it’s possible, but only if we sacrifice a lot of money for building reconstructions.

And what the customers should decide for? If they prefer some equity in their house condominium, they should choose the day degree method. If they want to solve problems resulting from uneven cost allocation such as ”he’s lucky as he lives in the central apartment”, they shall vote for the HCA method.
A frequent argument of HCA method proponents is that the degree day method is not anchored by CSN standards.  This is very likely to continue in the future as the day degree method calculation is so simple that can´t possibly be made simplier – the room temperature minus the outdoor temperature multiplied by the capacity of the room. That’s it. After all, for example, there is no CSN standard on an equation with two unknowns either, yet the  calculation is in fact much more difficult.  At buildings where the day degree method is used, there are no disputes, because the heat bill is fair as everyone pays for the heat, which he/she enjoys. 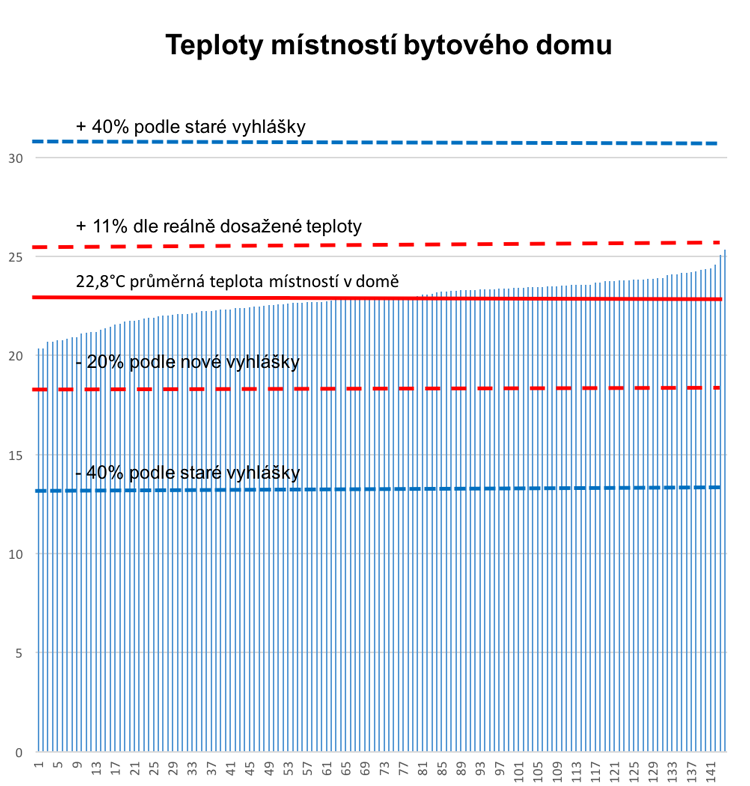 The picture shows the distribution of temperature in individual rooms in a building where the day degree method is used. Such data are available every day. Temperature curves during the heating season remain similar, because if the weather-compensated control of the heating system functions well, it keeps constant thermal conditions within the building.  The graph shows that room temperatures are ranging from 20 ° to 25 ° C.  Temperature limits that correspond to the percentages laid down by legislation are drawn in. The first thing that strikes you is the fact that – 40% and + 40%  is totally out of reality that may occur in a building. This would correspond to temperature difference ranging from 14 ° C to 32 ° C, which can not really be achieved even by extreme user behavior patterns. Still, if the HCA method was used, 15% of apartments would pay for heat as much as if they would have been enjoying 32 ° C. And vice versa – other 15% of users would  have been wearing hats and jackets at home, according to their measured values. Draw your own conclusions. Billing according the day degree method lies within the  + or – 11% range.
The temperature curve in the picture has not been specially selected for this article, but is confirmed by data collected from several hundred houses where the degree method is used.

Generally (and based upon experience), the first two years after the installation of any meter reading everything works fine. As time goes by, people get settled and everything returns to its original state. If we wish to achieve permanent savings, it is necessary to employ more sophisticated techniques. The day degree method has a huge advantage over the HCA method. It measures temperatures in apartments and rooms allowing you to easily find out how your heating system performs and whether or not it is balanced. And that is absolutely essential.

If  you hire a specialist and provide him/her with such data output, they will find the right balance of the heating system that can save up to 20% of your heating costs. And that’s worth it, isn’t it?

On-line meter reading of temperature and consumption of cold and hot water has its distinct advantages. In essence, it is based  upon the fact that you know what is happening in the building every minute. You may argue that it is not necessary. Personally, I believe that it is necessary. If you live in a family house, everything depends only on your own consumption patterns. But you probably live in a house with other X dozens of families, each one of them having their different needs. The habits of neighbours can dramatically affect your life. Water burst, gas leaks or ignition of electric appliances can significantly disturb you. Therefore you should be informed of the potential danger in time to be able to respond accordingly.